History was made on Saturday September 26, 2020 when the Annual General Meeting of the Igbobi College Old Boys’ Association was held virtually for the first time in the association’s history.

This milestone achievement was in deference to the COVID-19 guidelines and protocols which highlighted physical distancing and safe gathering.

The event, which was the first for the Olumuyiwa Kinoshi-led administration since coming into office last year, was well attended by old Igbobians who joined from all over the world.

The ICOBA President, Mr Olumuyiwa Kinoshi, thanked members for attending the meeting and for their resolute support for the Executive Council over the past year.

The major highlights of the virtual meeting, anchored from the Justice Duro Adebiyi Conference Room, ICOBA House are as follows:

1. The reading and the adoption of the Minutes of the 2019 AGM as well as reports of the President, the Secretary General, the Treasurer and the Auditor.

2. The re-appointment of Gbemiga Olagbaye and Co (Chartered Accountants) as the Auditors for another one year.

3. The appointment of Ambassador Aderemi Esan OON as a new member of the ICOBA Board of Trustees (BOT).

4. The appointment of Mr Maxwell Olubode Thorpe as the new Chairman of the ICOBA Board of Trustees (BOT).

5. The formal launch of the ICY 90th Anniversary Legacy Projects with special emphasis on the commemorative Wall of Fame.

6. The adoption of the new ICOBA Constitution.

Added on in the meeting were acceptance speeches from the newest member of the BOT, Ambassador Esan and the new chairman of the BOT, Mr Thorpe with both promising to serve the association diligently.

Former President of the Association, Engr Murphy Ipaye and Sir Kehinde Smith, outgoing Chairman of the Igbobi College Board of Governors (BOG), extolled the virtues of both BOT members, acknowledging their contributions, service and dedication to the Alma Mata cause, stating that both appointments were well deserved and merited. Sir Smith, who bows out as the BOG Chairman in November, also used the opportunity to thank ICOBA and all old Igbobians for their cooperation and support all through his tenure. He reserved special praise for Mr Foluso Phillips, ICOBA President for most his 5 year term as BOG Chairman, for his benevolence and brotherly support all the time.

The 1st Vice President, Mr Femi Olubanwo gave the closing remarks and moved the motion for Adjournment,  thus bringing the historic meeting to a close at 6:12pm 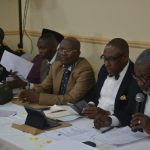 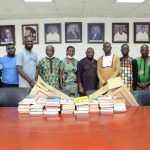 Principal, Igbobi College Yaba, Rev Adedotun Akanbi receiving some books from Dr. Elugbadebo Adewole 66/68 (former Captain of IC Rockets) and his children during the presentation of two cartons of books to the College today.

Sign up to receive latest news, updates, promotions, and special offers delivered directly to your inbox.
No, thanks